Off to Lets Rock Exeter this weekend to see, amongst others, Five Star (although I think there's only one of them now). I wonder if Denise still makes all the costumes? Part of me wants to really hate these 80s festivals, short sets, punters in cheesy costumes, overpriced 'cider' but the 13 year old me would have gone nuts to have seen ABC, Adam Ant, Kim Wilde, Toyah, Howard Jones and Tony Hadley on the same bill and...well...the 51 year old me is pretty excited too.
Posted by The Baron at 12:02 pm No comments:

Soooooooooo good to be back at MoFo (or maybe that should be MoFAF now they've added the 'Arts' bit) after 6 years away. Regular readers (both of you) will know that we went to every single MoFo and MoJaFuSo when we were living in Bearwood but our move to Devon coupled with various financial and logistical issues...ahem...made it impossible for us to attend for the past few years. Of course no bugger could attend in 2020 but we'll gloss over that.

I'm pleased to report that MoFAF's just as lovely as ever, a little bigger than when we were last there thanks to Folk On The Slope and Speakers Corner but all the better for it. We knew we'd enjoy old favourites (deep breath) The Wonderstuff, 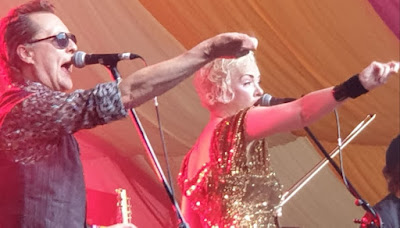 Pete Williams and Richard Hawley but there were plenty of new (to us at least) artists including Keeley Forsyth, Sinead O'Brien, Christie Reeves

that whet our musical whistles.

Jess Phillips (the place was rammed for her appearance...time to step aside eh Kier?), Pete Paphides (with Brum cultural ambassador Lyle Bignon  and Boat To Row's Michael King) and Rich Hall and it could almost have been a festival on its own. Sadly Barbara Nice clashed with Pete Williams, one of a number of clashes that's just part of the deal with festivals. I'm sure the two of 'em would've made a great double act...hmmmm.

Aside from the music and chat it was wonderful to catch up with so many dear old (and not so old) friends again and to make a few new ones too. Poignantly a couple were missing this time though, Brian Travers and Gaz Owen, but they both received the traditional MoFAF graffiti treatment (I spotted part of Paul Murphy's tribute image from waaaay back on the reverse of one of the walls of The Black Swan pop up pub too).

Who knows what the next 12 months will bring (aren't we due a plague of frogs and the four horseman of the apocalypse next?) but I'm already counting down the days to MoFAF 2022. Suggestions? Oh go on then...try PJ Harvey, Nick Cave, Marc Almond, Black Midi, Dexys, Jeffrey Lewis, Elvis Costello, Robert Plant, The Lovely Eggs, Richard Dawson, Courtney Barnett, Sleaford Mods, Wildwood Kin, Du Blonde, Kae Tempest, Ezra Furman and Billy Nomates. That'll do for starters.

PS: Huge thanks to all involved in organising, running and appearing at MoFAF, you made a middle aged man very happy.

Each and Every One - Everything But The Girl


Spent last night with Everything But The Girl's classic debut album Eden, one of NME's (remember them?) top 20 albums of 1984 apparently. The band seemingly jacked it in waaaaaaaaaaaaaaaay back in 2000 which was news to me. Where does the time go eh? What's that? Elvis is dead?! What?!! Aggggggggggggggghhhhh.
Posted by The Baron at 10:08 am No comments:


For reasons I won't disclose (mysterious eh?) this track's been spinning around my head today. A long lost classic from the good Captain in my humble opinion.
Posted by The Baron at 3:20 pm No comments:

"Welcome to a miracle" observed The Levellers' Mark Chadwick during their traditional opening acoustic set. Given that just a few weeks ago it seemed as though Beautiful Days wouldn't happen this year I'd say that was a pretty justifiable statement. Sure the loos were a bit crap (as it were) and there may not have been as many bands on as usual (or am I just imaging that?) but the organisers deserve nothing but oodles of praise for pressing ahead and giving every attendee yet another memorable weekend.

Day One's highlights included Peat and Diesel's craic-ing set, Henge's out of this world psychedelia, the return of Alabama 3 (Woke Up This Morning's still a classic) and the sublime pairing of kora player Seckoh Keita and harpist Catrin Finch, all capped off with Frank Turner (the thinking Millennial's Billy Bragg) and his Sleeping Souls and the legendary Hawkwind (whose lead singer Dave Brock turned 80 today...who says (space) rock 'n' roll's no good for you eh?).

Emerging from our tent in a cider induced haze on Day Two we caught garage punkters Fighting Rhythm (who'd travelled 8 hours to get here to replace another band, now that's commitment) and then bounced between the Main Stage and Big Top. Edward II 's blend of Jamaican and English folk was as inspired as ever, setting us up for some right skanking to The Selector. Is it me or is Pauline Black getting younger?  Despite the rain Gary Numan proved he's still electrifying (although happily he avoided getting electrocuted despite venturing onto a platform away from the shelter of the stage during the peak of the downpour) paving the way for another band who are enjoying something of a late career purple patch, James.

Day Three kicked off with some stunning blues covers from Dea Matrona and some equally awesome self penned folk from Katherine Priddy (whose debut album 'The Eternal Rocks Beneath' recently hit number one in the folk charts...hurrah!).

The rest of the afternoon saw us lapping up From The Jam. Dreadzone and Skindred before catching the proggier than a very proggy thing at a prog boot camp Van Der Graaf Generator's equally mesmerising , confusing and ever so slightly scary set (although that might just be the cider talking). As is traditional we listened to The Levellers closing set from the Tiny Tea Tent before collapsing in a messy heap. Ouch, my aching everything.

As ever we missed loads of great bands but spent many happy hours chatting with random strangers and taking in the unique sights, sounds and smells that make a festival such a bloody life affirming event.

Fly Me To The Moon - Tony Bennett


Sad to read that Tony Bennett's retiring from live performances at just 95 years young. What a legend. How many other singers can say they've been treading the boards for 70 years eh? 70! Good grief. I had the great pleasure of seeing and meeting Mr Bennett at Glastonbury back in 1998 when he was a mere 72 and, despite the rising tide of mud (oh so much mud), he sat there and signed autographs and chatted with fans for a good hour or so.
Posted by The Baron at 12:30 pm No comments:


Heard this track last night on the Ezra Furman fronted Marc Riley show. Reminded me a bit of a female fronted Campag Velocet. Cooooool.
Posted by The Baron at 11:06 am No comments: